Is dog insurance really worth it?

No one wants another monthly bill, and sometimes it might feel challenging to justify paying for pet insurance — especially when your dog is young and healthy. However, we never know when our dog can have a bad accident or develop an illness.

Is Pet Insurance Worth The Cost?

An online poll by Angie’s list showed that 65% of survey participants had experienced a pet medical emergency1. This number likely isn’t even including the number of pet parents whose pets have chronic illnesses, such as diabetes, hypothyroidism, and arthritis, which can be just as expensive to treat over time as a medical emergency.

Regardless of your pet’s current age and vitality, their health is never certain. Unexpected emergencies can happen at any time. Unfortunately, it’s estimated that as many as one in three pets in the United States will need some kind of emergency treatment each year2. This makes pet insurance a valuable investment to many Dog Moms and Dog Dads across the country — one that can not only save a significant amount of money, but could also save your pup's life.

Don't just take our word for it, though. Keep reading to learn 10 real-life examples of pet owners who believe dog insurance is well worth the cost. They're so grateful for their policy coverage that they felt inspired to tweet about it, urging their followers to also sign up before wishing they had done it sooner.

Dogs are curious creatures. Unfortunately, this can lead them to eat strange objects in their attempt to learn more about the thing. In Gerda the Dalmation’s case, this meant swallowing a tampon. Her pet parent immediately took her in, and Gerda had multiple surgeries to remove the swallowed tampon and save her life.

Thanks to her pet insurance plan, Gerda’s pet parent only owed $200 despite the $20,000 veterinary bill! We’re happy to report that Gerda is doing great now.

_A PSA for all pet parents from Gerda’s mom: _Please keep your tampons in a locked, high cupboard. 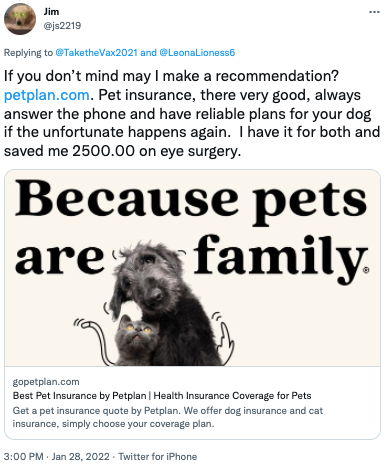 One pet parent, Jim, strongly recommends pet insurance. He has it for both of his dogs, and it saved him big time. One of his dogs needed eye insurance, and Jim saved $2,500 thanks to his pet insurance policy.

Eye surgery can be needed for many reasons. For example, many dogs develop cataracts as they age, which causes impaired vision and possible blindness. The recommended treatment for cataracts is usually surgery. Cataract surgery will typically cost between $2,700 and $4,000.

Many pet parents wouldn’t be able to pay this out-of-pocket, but many accident and illness pet insurance plans will help with the cost of this surgery, saving you thousands of dollars. 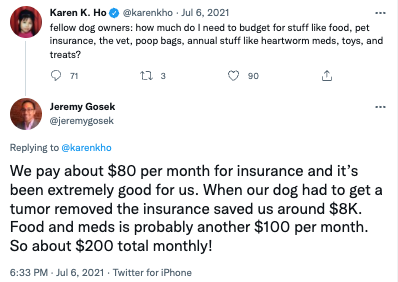 According to Jeremy, he pays about $80 per month for his dog insurance policy, and it’s been worth every penny. His dog needed to have a tumor removed, and their insurance plan saved them around $8,000.

This may seem like an extraordinary amount of money.

However, the initial costs for cancer diagnosis can easily be between $1,000 to $2,000, with a standard run of chemotherapy costing another $3,000 to $5,000. Many types of cancer surgery, such as soft tissue sarcoma surgery, can easily cost $9,000 or more. Many dogs will also need follow-up radiation treatments, which typically cost thousands of dollars3.

In addition, Jeremy said that his pet insurance is still saving him about $200 monthly on special foods and medications for his dog. This is an additional $2,400 in savings each year. We’re so glad to hear that Jeremy’s pup is doing well now and that he had a pet insurance plan in place to help with these bills. 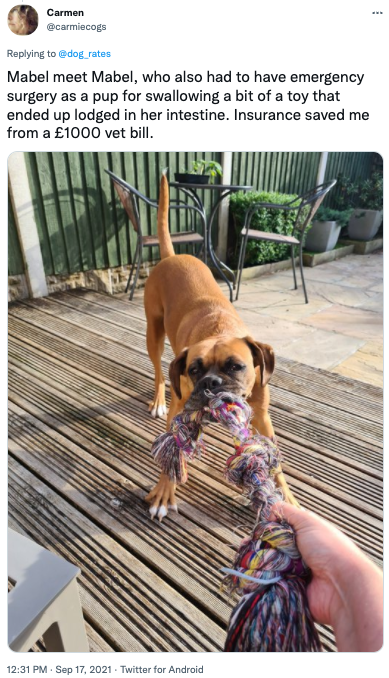 Like many dogs, Mabel was a bit of a mischief-maker as a puppy. She swallowed part of one of her toys, which became lodged in her intestines. Surgery for an intestinal obstruction can easily cost between $2,000 to $4,000 in the United States1. Swallowing foreign objects is an unfortunately common problem among dogs, especially puppies, and can be fatal.

In Mabel’s case, her pet parent was reimbursed for the one thousand pound vet bill (around $1,345). We think this is an especially scary case because any dog could accidentally swallow part of a toy and are very glad to hear that Mabel is okay!

5. A Stomach Virus for the Holiday

Rach shares that her dog contracted a stomach virus, or perhaps got into some holiday food that dogs can't eat. The fact that her pup caught a stomach bug on a holiday, likely resulted in more expensive “after hours” vet bills.

Rach spent 5.5 hours at the emergency vet and $730 to get her dog treated for the stomach virus. However, her pet insurance will reimburse her for most of that, and her dog is doing well now!

This is not an unusually large treatment cost. For example, Parvo, a gastrointestinal virus, is common among dogs, even in vaccinated dogs. Typically, treatment for Parvo will cost between $500 to $2,000. This number does not include additional costs for diagnosis or hospitalization, which may be needed to treat your pup.

Needless to say, we are glad that Rach had pet insurance and that her dog is doing better! 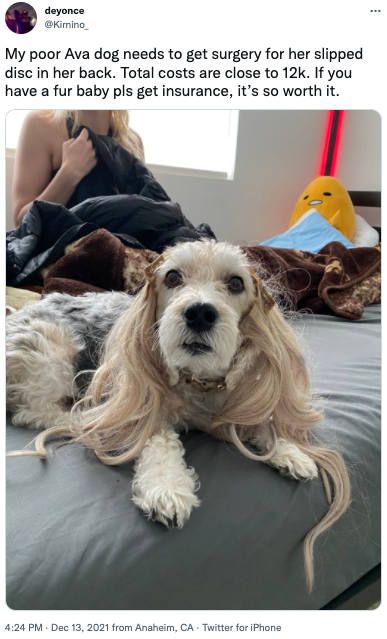 One pet parent was worried sick that her dog, Ava, would lose the function of her hind legs due to a slipped disc in her back. Fortunately, her dog insurance policy covered Ava’s surgery. In her original tweet, she shared that the surgery cost $12,000, but in an update, she shared that the costs came closer to $15,000. We’re happy to report that Ava is doing great after her surgery now!

According to the Southeast Veterinary Neurology clinic, surgery for a slipped disc commonly costs between $8,000 to $10,000 for small dogs and $10,000 to $14,000 for larger dogs4. Depending on where you have the surgery done, this may not even include the costs of hospitalization and diagnostic testing, such as bloodwork, x-rays, and an MRI.

A pet insurance plan can save you thousands of dollars when it comes to surgery, as Ava’s pet parent found out.

When talking about pet insurance savings, many often forget to think about the savings from a wellness plan, which helps cover routine veterinary care costs. In Lexi’s case, she signed her dog up for a wellness plan and has already saved big. She took her dog in for deep dental cleaning and walked out of the vet’s office not owing anything. Her total savings? $417.

A routine care plan can save pet parents hundreds of dollars in routine veterinary costs throughout the year, such as wellness exams, the cost of dog teeth cleanings, vaccinations, deworming, and so much more.

8. A Pup With Strange Taste

Anne’s dog has some strange tastes. Within six weeks, her dog ate rocks twice. As demonstrated by some of the other tweets, foreign object swallowing is a common and dangerous occurrence among dogs.

Chevy has two dogs, both who are fortunately insured with a pet insurance provider. One of her dogs needed knee surgery, and she saved $5,000 thanks to her pet insurance. Over the years, Chevy believes that she has easily saved $10,000 between both of her dogs, which is absolutely incredible!

Surgery for a luxating patella typically costs between $1,000 to $5,000. Pet parents also need to consider post-operation expenses, like rehabilitation and medications. Rehabilitation will usually cost between $40 and $100 per session, and pain medications can cost between $20 and $50 per month. With surgery, many dogs are able to walk and run comfortably again. Accident and illness coverage from a pet insurance plan can give you coverage for surgery, prescription medications, physical therapy, and much more, making it an excellent investment for many pet parents.

Chevy is certainly glad that she had her dogs covered, as knee surgery isn’t inexpensive. 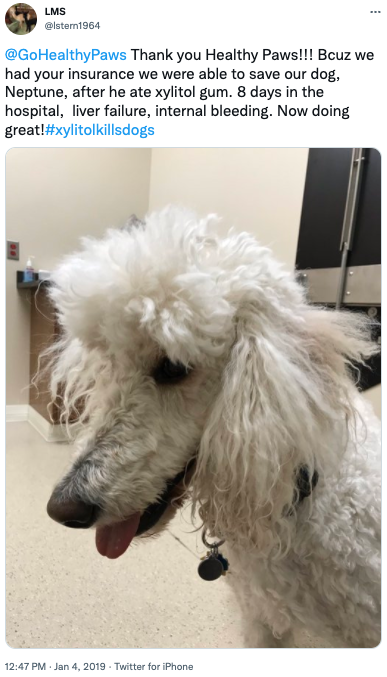 Neptune is one lucky pup! Neptune consumed gum with xylitol, which is among the most dangerous foods that a dog can consume.

It’s estimated that xylitol ingestion can cost between $750 to $4,000 to treat1. This figure is not including the costs of hospitalization and other veterinary treatments for sustained damage to the dog’s body. In Neptune’s case, he went through liver failure and internal bleeding, which needed immediate medical attention and likely added thousands of dollars in additional costs to his pet parent’s vet bill.

We’re so happy to report that Neptune has fully recovered after spending eight days in the hospital and being treated for his liver failure, internal bleeding, and other ailments related to eating xylitol.

We hope these tweets gave you some insight and great examples of why dog insurance is worth it and how you can save money on so many types of veterinary care with it.

Interested in finding an amazing dog insurance policy from a top-rated dog insurance provider? We’ll compare the top plans side by side for you, so you can easily compare different plans and pricing. Get your free pet insurance quote today.

Kaelee Nelson is a die-hard dog mom, part-time dog trainer, and ultimate pet enthusiast. She recently rescued a puppy named Zoey who went from the streets of Mexico to the big lights in L.A. after Kaelee helped her become officially studio-trained for production work, with the goal of strengthen her dog's confidence as well as the bond they share. Kaelee remains passionate about pets in her role as Content Marketing Manager by helping owners prepare for the financial burden that often comes with giving our furry BFFs the best care possible. Enrolling Zoey in a pet insurance policy was a no-brainer for Kaelee, as it enabled her to get reimbursed for vet costs like spaying, vaccinations, routine care, and more.

10 Tweets That Show Cat Insurance Is A Good Decision

Is Odie Pet Insurance Good? Here's How It Stacks Up

Is TrustedPals Pet Insurance Good? Here's How It Stacks Up

How Many Pet Owners Have Pet Insurance in 2021?

Is ManyPets Pet Insurance Good? Here's How It Stacks Up

How & Where To Buy Pet Dental Insurance

Is There Cat Insurance That Covers Everything? It Depends

How To Get Cheap Cat Insurance Rates

How & Where To Buy Cat Insurance

Can You Have More Than One Cat Insurance Policy?

What Cat Insurance Do You Need? It Depends

When To Buy Cat Insurance: A Licensed Agent's Perspective

Is Prudent Pet Insurance Good? Here's How It Stacks Up

Is PetPartners Pet Insurance Good? Here's How It Stacks Up

Is Farmers Pet Insurance Good? Here's How It Stacks Up

Can You Switch Pet Insurance?

Is Costco Pet Insurance Good? Here's How It Stacks Up

Is Allstate Pet Insurance Good? Here's How It Stacks Up

Is Spot Pet Insurance Good? Here's How It Stacks Up

Is MetLife Pet Insurance Good? Here's How It Stacks Up

Is Pet Assure Any Good? Here's How It Stacks Up