Pet insurance can seem like one more added expense to your monthly budget. However, these pet parents saw the value of pet insurance first-hand after it saved them from some insanely expensive vet bills.

According to Eve Kaplan, a New Jersey-based financial planner, pet parents should expect to spend between $2,000 to $4,000 per year on their pet. She states that this number can quickly be blown up by an unexpected medical crisis, which can add thousands of dollars to your yearly cost of owning a pet1.

When working with clients who own pets, Eve Kaplan recommends planning for these unexpected medical crises, which makes perfect sense considering one in three pets will need emergency veterinary treatment each year2. Unfortunately, this means that most of our pets will experience multiple medical emergencies throughout their lifetime, which can leave many pet parents in a financial pinch.

Pet insurance provides pet parents with a financial safety net for these unexpected medical emergencies. Today, we want to share stories from 11 pet parents who are extremely happy that they signed their pet up for a pet insurance plan because of how much they saved later on when their pet needed veterinary care the most. 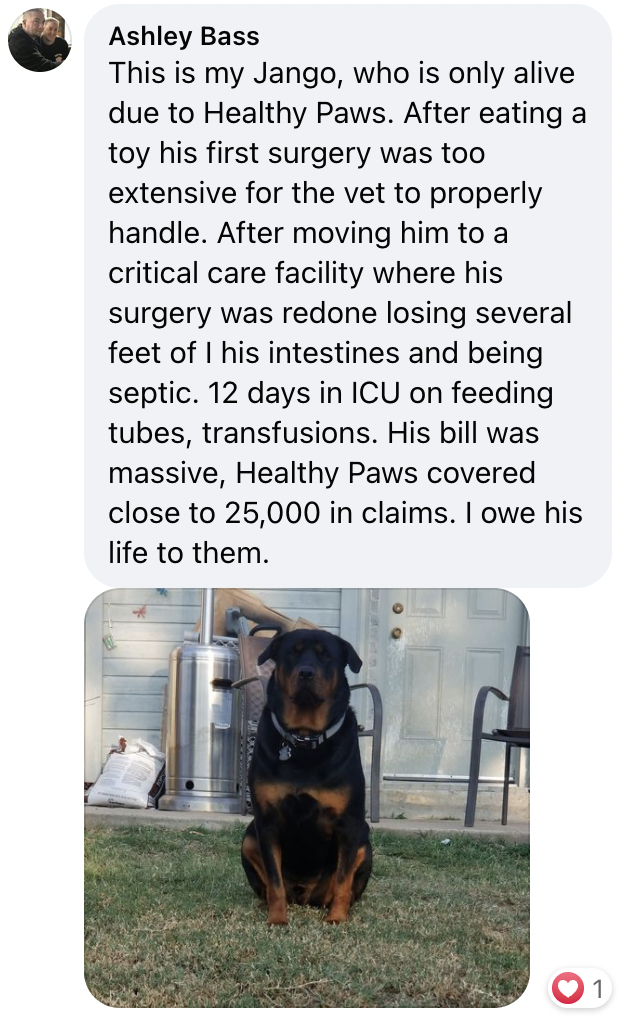 Ashley Bass, Jango’s pet parent, says she owes her pup’s life to Healthy Paws Pet Insurance. After Jango swallowed a toy, he was rushed to the vet, where they then moved him to a critical care facility because the first surgery needed was too extensive for Jango’s regular vet to handle at their facility.

After being moved to the critical care facility, Jango underwent surgery where they removed several feet of his intestines and removed the swallowed toy. Unfortunately, Jango developed sepsis. As a result, Jango was in the ICU on feeding tubes and received multiple transfusions.

In her own words, Ashley says, “I owe his life to them.” 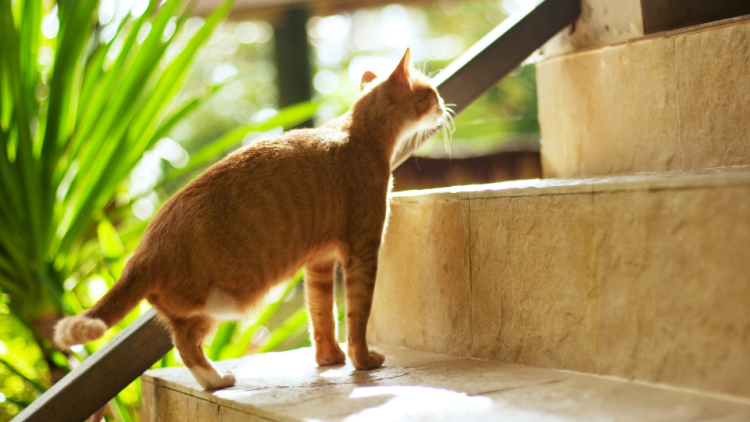 Mochi is a five year old cat who recently battled osteosarcoma, an aggressive bone cancer, that left her in bad shape. After surgery for her cancer and having her leg amputated, she’s doing much better. Between all the hospital stays, diagnostic testing, laparotomies, laster therapy, and more, Mochi’s vet bill was about $10,000. Her pet parent’s pet insurance provider reimbursed them for nearly $7,500.

We think that Mochi’s pet parent is definitely relieved they had a pet insurance plan already in place.

3. Beqa the Dalmatian Has Strange Taste 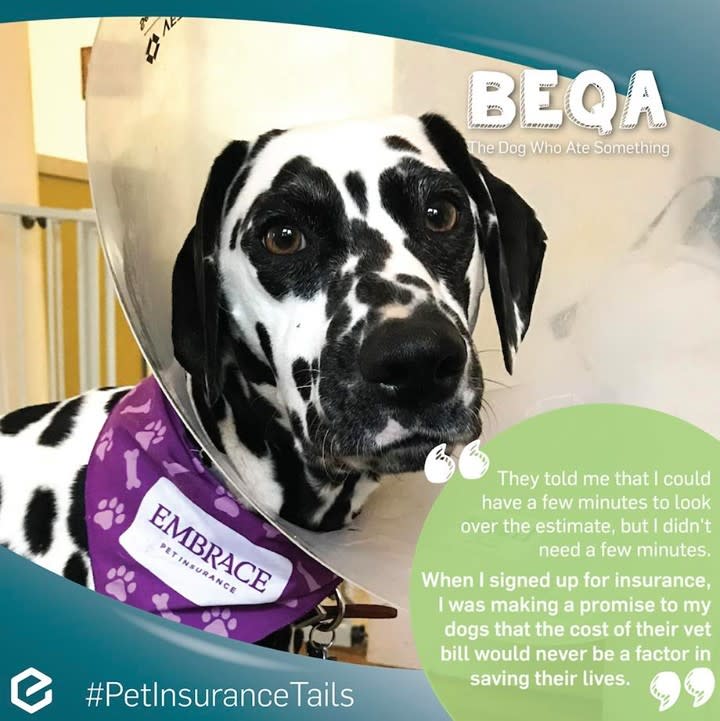 Beqa is an adorable Dalmation who got sick right after her first birthday. She experienced no appetite, fatigue, and frequent vomiting. However, her vets were initially unable to figure out what was wrong despite several trips to the vet and x-rays. Eventually, she was taken in for emergency surgery, where they found plastic bottle caps that Beqa had eaten months ago.

Post-surgery, Beqa is now doing great and is back to her happy self. Beqa’s mom was reimbursed $6,700 for Beqa’s emergency bill, thanks to her pet insurance plan.

Michelle could not be happier that she invested in pet insurance. Her dog needed cataract surgery, which on its own was already expensive. However, immediately following the surgery, her dog went into diabetic ketoacidosis, which required treatment and hospitalization.

Michelle was thrilled she had pet insurance for her dog because she was reimbursed for her claim in less than 24 hours. The total? Over $12,000.

Camilla adopted a sweet dog named Scooby and set him up with pet insurance right away. Soon after, Scooby stopped eating, and Camilla knew something had to be wrong since Scooby loves food more than anything else. When she took him to the animal hospital, blood work revealed that Scooby was struggling with acute lymphoblastic leukemia.

Unfortunately, there is no cure for this condition. However, Scooby was moved to a specialist at a veterinary cancer center and began chemotherapy treatments. Prescribed medications, home-cooked meals, herbal supplements, and acupuncture were all given to Scooby regularly to help him cope with his cancer and the side effects of chemotherapy.

The amazing news? Scooby was initially given only weeks to live but has lived eight months past his diagnosis and continues to respond well to chemotherapy. Scooby is constantly improving, and his cancer even went into remission. Camilla is able to provide Scooby with the best care because of her pet insurance provider, who has so far paid for over 30 claims related to Scooby’s leukemia. The total payout has been close to $9,000 at the time of writing this piece.

6. Mischievous Kittens Got Into Trouble 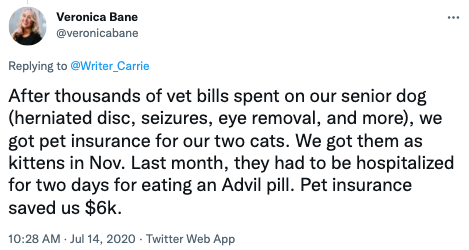 Veronica recently adopted two kittens. After her senior dog had thousands of dollars of vet bills for numerous health issues, she immediately decided to get pet insurance plans for her kittens.

Recently, her kittens had to be hospitalized for getting into trouble when they ate Advil. This hospitalization was expensive. Fortunately, her pet insurance plan reimbursed her for $6,000 so that she didn’t have to take a financial hit to provide her kittens with the care they needed. 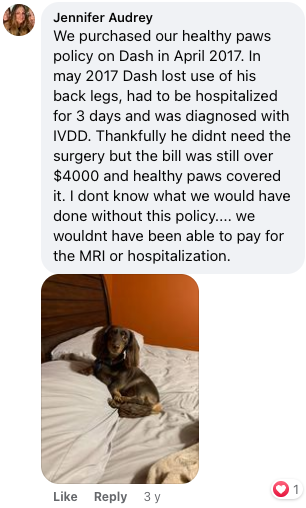 Jennifer’s sweet Dachshund was insured in April 2017 - just in the nick of time! In May 2017, Jennifer’s Dachshund lost his back legs and was diagnosed with Intervertebral Disc Disease (IVDD) using an MRI. He was then hospitalized and treated. Her Dachshund didn’t need surgery, but the veterinary bill was still over $4,000. 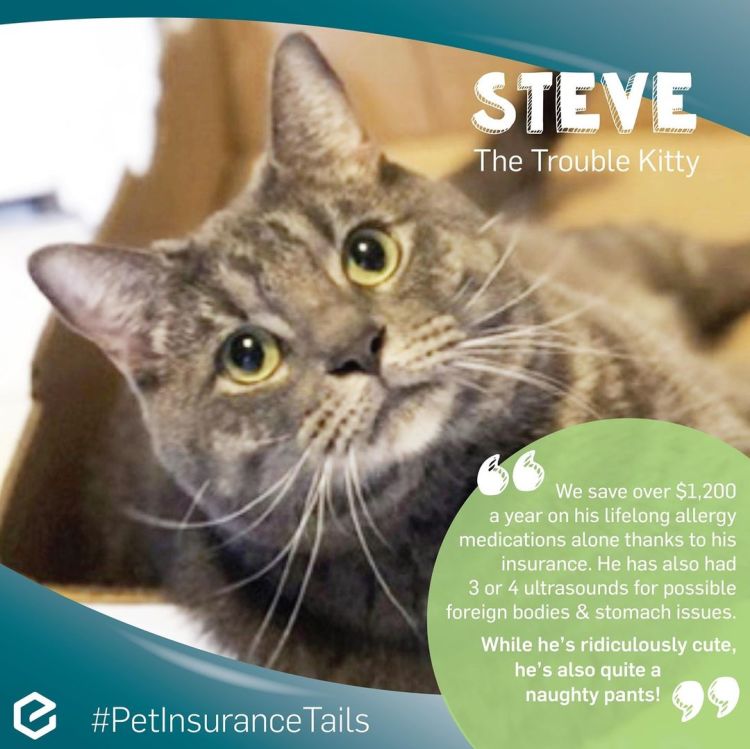 Steve is a ridiculously cute but naughty cat who likes getting into mischief. Unfortunately, when Steve was about a year old, he ate an entire package of dog treats. While this didn’t turn into anything life-threatening, it appears to have created an allergy because Steve started having immune-related responses and extreme itchiness.

Steve’s itchiness was so severe that he began rubbing his eyes and getting ulcers in his eyes. After many visits to a veterinary dermatologist and ophthalmologist, his allergy was diagnosed, and Steve was started on allergy medication. Unfortunately, Steve’s allergies will be lifelong, and his medication costs $150 per month, which quickly adds up for his pet parents. Fortunately, his pet parents had a pet insurance plan on him that covers 80% of this cost, which will save his pet parents about $1,200 per year for the rest of his life.

Steve has also gotten into mischief with swallowing foreign bodies and has had stomach issues, so he’s had three or four ultrasounds, which were also covered with his plan. 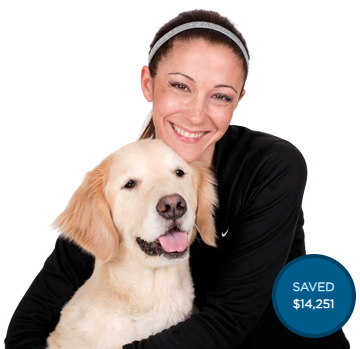 Riley is a sweet Golden Retriever who is best friends with her pet parent, Dari Passarello, a marathoner. One day, Dari noticed that Riley had a limp, and she took Riley to her veterinarian. Unfortunately, Riley was diagnosed with advanced arthritis at the age of four.

Riley needed immediate surgery for her advanced arthritis. Thanks to Dari’s pet insurance plan, she saved $14,251 and didn’t need to worry about the cost of Riley’s surgery. Medical emergencies and health problems can occur at any time, even to young pups like Riley, which is why we’re glad to hear that Dari already thought ahead and had a pet insurance plan in place for Riley.

David Markham’s Boston Terrier, Sydney, went through a host of health problems throughout her lifetime, which is why he is so passionate about telling others about the benefits of health insurance today. David got Sydney a pet insurance plan at the age of five, and it quickly paid off for him.

Fortunately, Sydney’s pet insurance plan reimbursed David for $47,000, which allowed David to get Sydney the best veterinary care available and keep her as healthy and happy as possible during her lifetime.

We never know what the future holds for our pet’s health. While some of these accounts may seem like they’d never happen to your dog or cat, we’ll never know for sure how things may turn out. Pet insurance protected these pet parents’ finances while allowing them to provide their pets with the best veterinary care available. As many of these pet parents noted, they wouldn’t have even been able to afford these necessary surgeries, medications, or diagnostic testing without their pet insurance plan.

Unfortunately, pets can have accidents or emergency health problems at any point during their life, so even having a young, healthy pet doesn’t protect you from a sudden emergency, like your pet being hit by a car or swallowing a foreign body. Act now and give yourself peace of mind when you sign your pet up for a pet insurance policy. Simply answer a few questions, and we’ll show you the best pet insurance providers on the market and personalized quotes for your pet side by side so that you can easily choose an excellent plan for your pet.

Kari Steere is a licensed P&C insurance agent in all 50 states and has focused entirely on pet insurance since 2019. As an animal lover with a rescued Terrier named Barry, when she's not helping pet owners find the perfect plan on Pawlicy Advisor, she runs a ranch in Oregon and rehabilitates any animals that come across her path.

How To Compare & Find The Right Pet Insurance

Is Pet Insurance Worth It in 2022? Here’s A Vet’s Perspective

How to Get the Best Pet Insurance Plan, No Matter the Provider

Pet Insurance for More Than One Pet: Multi-Pet Discounts And Strategies

When Is Pet Insurance A Great Decision?

How Does Pet Insurance Work & What Does It Cover