From the daring and imaginative, Snoopy, to the iconic lady's man, Brian Griffin, fictional dogs everywhere have captured the nation’s heart. Who could forget when Courage the Cowardly Dog had to save his owner, Muriel, from a mutilated carrot she ate, prompting her to continue growing until she risked exploding? Or Max’s heroic sleigh-pulling abilities in How The Grinch Stole Christmas?

Fictional dog characters have shaped entertainment and created some of our best childhood memories, creating an impact that has lasted long after shows have been taken off the air and the movie credits rolled. With stiff competition like Pluto, Clifford, Scooby-Doo, and more in the running, we wanted to discover which fictional dog took front and center and was the favorite companion in each state.

To determine the most trending fictional dog in every state, the team at Pawlicy Advisor analyzed Google Trends search data for 70 of the most well-known dogs in fiction from August 2021 to August 2022.

We use that metric to compare keyword search interest across both states and search terms. Even though overall search volume may be higher for a certain term, the search interest metric, when compared across each search term, tells us what searches are being conducted more regularly today in some states versus others. Keep reading to find out each state’s favorite fictional dog characters!

The top trending fictional dog in the U.S. is Clifford. The namesake of the cartoon, Clifford the Big Red Dog, is a trending search in the following 10 states: Indiana, Kansas, Louisiana, Michigan, Missouri, Nebraska, Oklahoma, South Carolina, Tennessee, and Washington, D.C. This spike could be attributed to the release of the live-action Clifford film released in November 2021.

Other highlights include the trending popularity of Huckleberry Hound and Courage the Cowardly Dog, both being the top trending fictional dog in three states each. Huckleberry is trending in Arizona, North Carolina, and Virginia while Courage is the top dog in Arkansas, Kentucky, and North Dakota.

Scroll through our full data below to see which of our favorite fictional hounds are trending in your state!

The Top Trending Fictional Dog in Every U.S. State 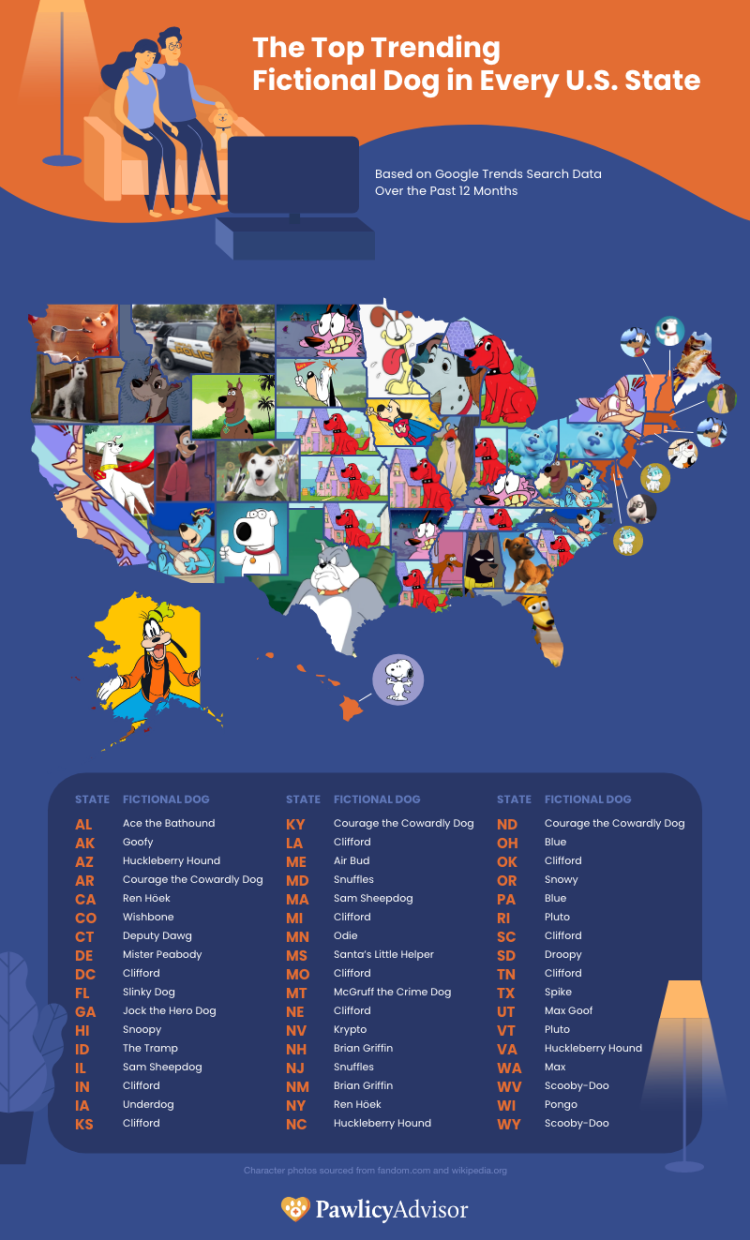 When it comes to the top trending fictional dog in every U.S. state, there were a few that stood out from the rest of the pack. Pongo, the beloved dalmatian, was a favorite among Wisconsinites. Wisconsin is known for its frigid subzero temperatures, which could pose one connection to the villain in 101 Dalmations, Cruella de Vil, who plans to capture the puppies to create her own fur coat.

Speaking of famous fictional dogs, Disney’s Goofy, reigned supreme in Alaska. Coincidentally, the Disney Cruise Line does set sail to Alaska where you can meet your favorite clumsy fictional dog, Goofy — just don’t ask him to pull a dog sled! 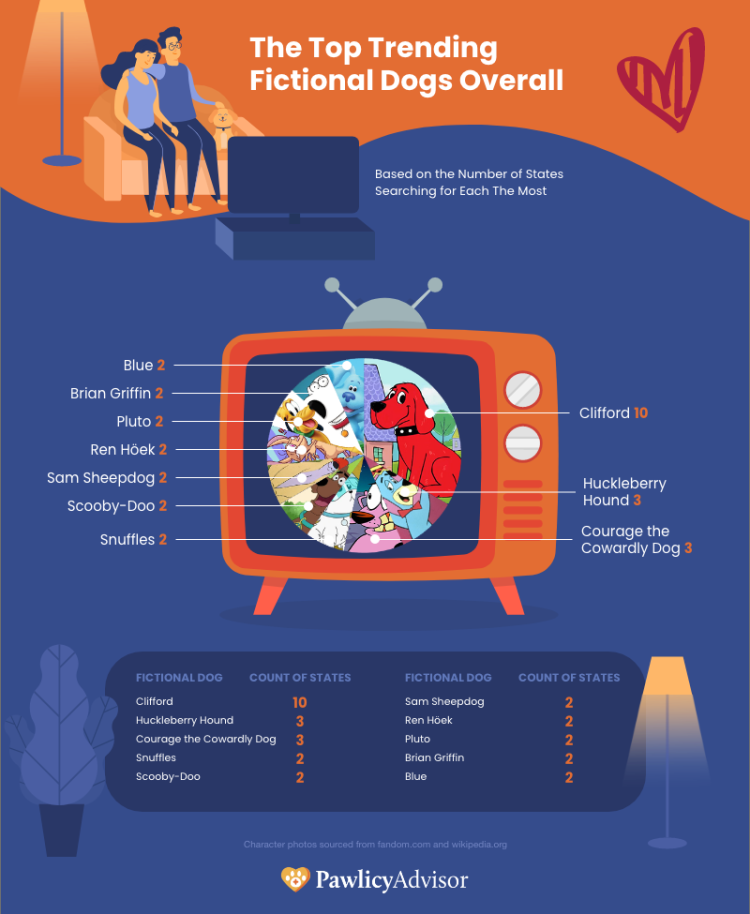 There are some fictional dogs on TV that you just can’t get enough of. Clifford from Clifford the Big Red Dog had the highest search interest in ten states, including places like D.C., Kansas, Louisiana, Missouri, Oklahoma, South Carolina, and Tennessee. It’s no secret that Clifford is huge! He ranges from 8 to 35 ft. depending on the book. As South Carolina, Kansas, and Oklahoma are home to plenty of cities with the most open space, it makes sense why they’re captivated by a dog that could actually fit in their own backyards!

Tying for third place is Scooby-Doo, who stole the show in West Virginia and Wyoming. West Virginia is the number one fan of great Danes, which makes sense as Scooby-Doo is modeled after the gentle giant!

Blue’s Clues’ Blue is the highest-searched fictional dog in Ohio and Pennsylvania. Steve Burns, who starred in the Nickelodeon show from 1996 to 2002 is a Berk’s County, PA, native. He recently celebrated the show’s 25th anniversary with a heartwarming Twitter video that amassed more than 34 million views, likely prompting a renewed interest in the Pennsylvania actor and the spotted blue dog.

There you have it — the top famous fictional dogs in every U.S. state! From Sam Sheepdog to Air Bud, these fictional dogs have captivated our hearts and minds for generations.

While dogs on TV don’t need to worry about unplanned trips to the vet, the same can’t be said for your real-life companions. At Pawlicy, we know you want to give your pet only the best, which is why our free tool helps you find pet insurance policies that work best for you. Discover how pet insurance works and get a quote today so you and your furry friend can be one step closer to having the peace of mind you deserve.

Kaelee Nelson is a die-hard dog mom, part-time dog trainer, and ultimate pet enthusiast. She recently rescued a puppy named Zoey who went from the streets of Mexico to the big lights in L.A. after Kaelee helped her become officially studio-trained for production work, with the goal of strengthen her dog's confidence as well as the bond they share. Kaelee remains passionate about pets in her role as Content Marketing Manager by helping owners prepare for the financial burden that often comes with giving our furry BFFs the best care possible. Enrolling Zoey in a pet insurance policy was a no-brainer for Kaelee, as it enabled her to get reimbursed for vet costs like spaying, vaccinations, routine care, and more.

Here's Why Your Puppy Is Throwing Up & What To Do Next

The Best U.S. Cities to Date With Your Dog

Fading Kitten Syndrome: What It Is, Why It Happens & What To Do

7 Common Mistakes You Can Make When Training A Kitten

7 Things You Need To Know Before Getting A New Kitten