Young puppies are extremely vulnerable and sensitive to various health hazards, and parasites are among the most common ones. If left untreated, puppy parasites can result in respiratory, gastrointestinal, and immunity issues — and in severe cases, death. Understanding the symptoms, risks, and treatment options is essential.

Here’s everything you need to know about the most common parasites in puppies:

How do puppies get parasites?

Young puppies have weak immune systems, which makes them vulnerable to health problems. Most puppies require a deworming treatment shortly after birth, as some parasites can be passed on from their mothers.

Puppies can also get parasites through food or water and from the environment. For instance, whipworms and hookworm larvae might live in the soil your pet digs in.

Tapeworms are intestinal parasites that are flat, segmented, and belong to a family of worms called cestodes. _Puppies can contract several types of tapeworms, but the most common in the US is Dipylidium caninum._

Puppies contract tapeworms by ingesting the original host, which is usually a flea. Symptoms include diarrhea, weight loss, intestinal blockages, but you may also see parts of the worms in the puppy’s stools or around the anus. Tapeworms can be contagious for other pets and humans.

Roundworms are common parasites that live inside a puppy’s intestines. Puppies get two main roundworm species: Toxascaris leonina and Toxocara canis. The latter is worse and can be transmitted to people. Roundworms are usually light brown or white and can be up to a few inches long.

Your puppy can get roundworms if they eat roundworm eggs that come from another animal’s poop, or if they eat small animals that are infected. It is very common for puppies to be born with roundworms, as the larvae are often transmitted from the mother dog before birth or through the milk during nursing. Most common symptoms in puppies include malnourishment, diarrhea, vomiting, pot-bellied appearance, etc.

Similar to roundworms and tapeworms, hookworms are intestinal parasites that live in a dog’s digestive system. There are several types of hookworm parasites that commonly affect puppies, including Ancylostoma caninum and Ancylostoma braziliense, which are found in warm climates, as well as Uncinaria stenocephala which is prevalent in cool climates. The worms are pinkish-white and can reach 0.3 to 0.5 inches in length. Puppies can be infected by picking up larvae from soil or feces. 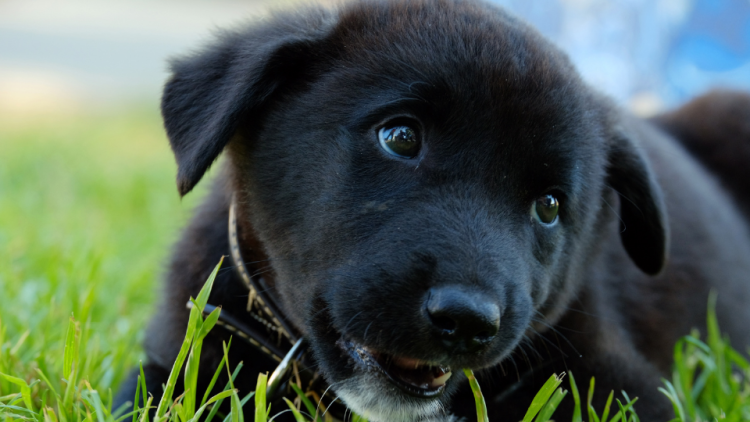 Whipworms are another common parasite in puppies that get to be about one-quarter-inch-long while living in the cecum and colon. They get their name from their shape which resembles a whip. Puppies become infected with whipworms by swallowing infective eggs in soil or other substances that might contain dog feces. Dogs that are infected with a few whipworms might not exhibit any symptoms, but more severe infections can cause bloody diarrhea. If left untreated, whipworm infection can cause serious disease and even death in puppies.

Whipworms are not a zoonotic threat, which means they can’t be passed from dogs to people. Humans have their own species of whipworm, Trichuris trichiura, that’s spread through human feces.

Heartworms are parasitic worms that live in the heart and surrounding blood vessels of an infected puppy. Immature heartworms are spread by infected mosquitoes. They can reach one foot in length. Common clinical signs include trouble breathing, cough, trouble exercising, and a distended belly. If many worms live in the heart at one time, they can cause damage to the lungs and prevent the heart from pumping blood properly. If not treated, heartworm disease can result in death.

Canine heartworm disease is rare in puppies because it takes a long time for the infective larvae to develop into adults (about six months). However, once they reach adulthood, heartworms live from five to seven years, so once your puppy is infected, heartworm disease is likely to develop if the pet is not treated. Therefore, heartworm prevention is recommended starting at eight weeks old and should be used lifelong. People can't get heartworms from their puppies — only from mosquitos that carry the infection.

Giardia is a single-celled parasite that lives in the intestines of dogs and causes severe gastrointestinal disease. Its trophozoites are pear-shaped and measure from ten to 20 micrometers in length. The parasite is spread by fecal-contaminated food, soil, or water. Humans can also catch Giardia from their pets.

The most common symptom is watery diarrhea. Other symptoms of Giardia in dogs include vomiting, decreased appetite, frequent urges to poop, and decreased energy.

Coccidia is a common single-celled (protozoan) parasite that colonizes the lining of the intestine and can cause coccidiosis. The most common strain of Coccidia in puppies is Isospora (also known as Cystoisospora). Young puppies are the most vulnerable, especially those stressed by other illnesses or living in crowded conditions or an unsanitary environment. Puppies contract the parasite by swallowing infective oocysts that have been deposited in the environment via feces or by ingesting an infected animal.

The most common signs include diarrhea (which may become more severe or bloody), vomiting, dehydration, and weight loss which when left untreated can result in death. While there are some species of coccidia that can spread to people, Isospora is not known to cause any health issues in people. 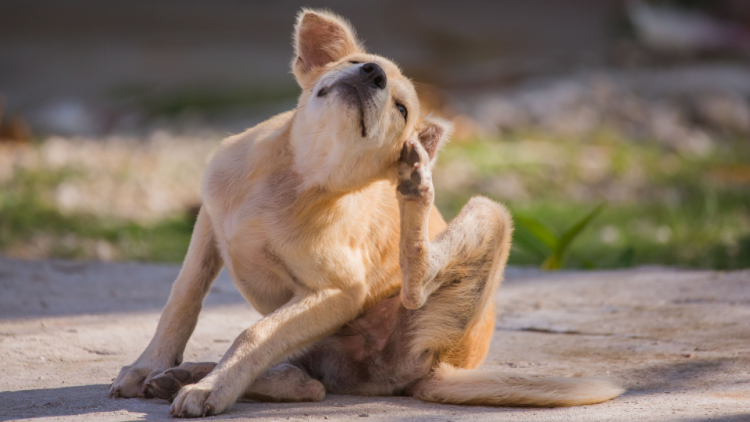 Fleas can cause excessive scratching, chewing, and licking in puppies. In more severe cases, a flea infestation can lead to a number of health issues, including tapeworms, anemia, bacterial infections, and hot spots.

Humans can get fleas from their pets. If your puppy has had fleas, be sure to employ a steam cleaner for upholstery, carpets, and pet beds, paying special attention to any spots where your puppy usually lies down or spends a lot of time in.

Ticks are parasites that feed on the blood of their host, which can be a dog, human, or another animal. They can lead to several serious diseases, including Rocky Mountain Spotted Fever and Lyme disease.

Tick infestations are rare indoors, but it doesn’t hurt to take precautions. Owners should also implement outdoor tick prevention to reduce the risk of ticks in the house carried in on a pet’s fur coat.

How to know if your puppy has a parasite

The best way to know if your puppy has a parasite is to have a stool sample analyzed in a fecal exam by your veterinarian — so remember to bring a sample with you to your first vet visit. Puppy parasite symptoms will depend on the type of parasite. Some internal parasites won’t cause noticeable symptoms, while others might affect the puppy’s digestive system.

Common Symptoms of Parasites in Puppies

Heartworms, which affect the lungs and cardiovascular system, can also cause respiratory issues, coughing, weight loss, and death.

You can also notice some internal parasites such as whipworms, hookworms, tapeworms, and roundworms in your puppy’s poop. Remember, the best way to identify parasites in puppy stool is to take a sample of the poop along with any worms you find to your vet’s office where they will perform a fecal test to identify and treat the parasites.

Note that external parasites might cause different symptoms, including:

If you notice any differences in your puppy’s health or behavior, be sure to contact your vet.

How do you treat parasites in puppies?

When it comes to treating parasites in puppies, prevention is the best option. You can lower the risk of your puppy contracting parasites by making fresh water available at all times, keeping your puppy’s bowl clean, keeping your yard and garden clean, removing faces, and cleaning up the dirt and hair left by other animals.

Treatment is based on the specific parasite. However, if your puppy is infected, the vet might prescribe oral deworming medication. On average, the price for deworming medicine can range anywhere from $8 to $55, depending on the parasite being treated, the condition, and the type of medicine.2 In general, prescribed medications cost more than over-the-counter ones. Your puppy might need more than one round of deworming medication. The possibility of transplacental transmission, i.e. mother-to-puppy infection makes immediate deworming a necessity to keep newborn puppies healthy.

Heartworm treatment is often more complex compared to treatment for other parasites. Your pup might need a series of antibiotics, anti-inflammatory drugs, and injections, followed by activity restrictions. The average cost to treat heartworm in puppies ranges from $500 to $1,100, depending on the dog’s size, the stage of the disease, and the medication being used.

Pet insurance can cover costly treatments your puppy might need throughout its life, including parasitic infections. In addition, wellness plans that are available as part of many pet insurance policies might cover most of your annual preventative medication. Pawlicy Advisor can make buying the best pet insurance policy easier by helping you compare coverage and quotes from the leading US pet insurance providers.

Is it normal for puppies to have parasites?

Yes, both internal and external parasites are very common in puppies and, if left untreated, they can cause severe diseases.

Which internal parasites are most commonly found in puppies?

The most common internal parasites in puppies are roundworms, whipworms, hookworms, tapeworms, Giardia, and Coccidia.

Which parasite is commonly transmitted transplacentally to puppies?

Puppies can get intestinal parasites like roundworms from their mothers. Transmission of heartworms requires a bite from an infected mosquito, so transplacental transmission from a mother dog is not possible.

How long does it take to get rid of parasites in puppies?

Treatment for parasites usually lasts for about two weeks and your puppy might require special hygiene routines or exercise restrictions. They might also require multiple rounds of deworming medicine: one round can destroy the adult worms and another to take care of any remaining larvae or eggs.

How To Take Care Of A Puppy

How To Puppy-Proof Your House

5 Common Illnesses In Puppies To Watch Out For

Parvo in Puppies: Everything You Need to Know

Most Common Accidents In Puppies By Pet Insurance Claim