We all know watermelon is delicious and packed with nutrients. Plus, it is made of 92% water, so it can be especially refreshing on a hot summer day. But is it safe for dogs? The answer is yes, but before you feed your pooch this juicy fruit, there are a few things you need to know.

Pro tip: A great number of emergency vet visits occur after your pup eats something they’re not supposed to, so having dog health insurance could save you a great deal of money (and headache).

Can Dogs Eat Watermelon And What Are Its Nutritional Benefits?

Despite popular belief, dogs are omnivores, which means that incorporating some fresh fruits and vegetables into their diet can be a good idea.

There are two major vitamins which your four-legged companion will get from eating this fruit:

Watermelon is also rich in vitamin C that may help protect your dog against sniffles and allergens, as well as important minerals like calcium and potassium.

This delicious fruit is also packed with lycopene, a plant nutrient that acts as an antioxidant, combating harmful free radicals in both the human and dog organism.

What about sugar? While it is true that watermelon contains sugar, it is also quite rich in dietary fiber, which slows down the natural release of sugar.

Let’s not forget that watermelons are mostly made of water, which means they’re hydrating and low in calories. 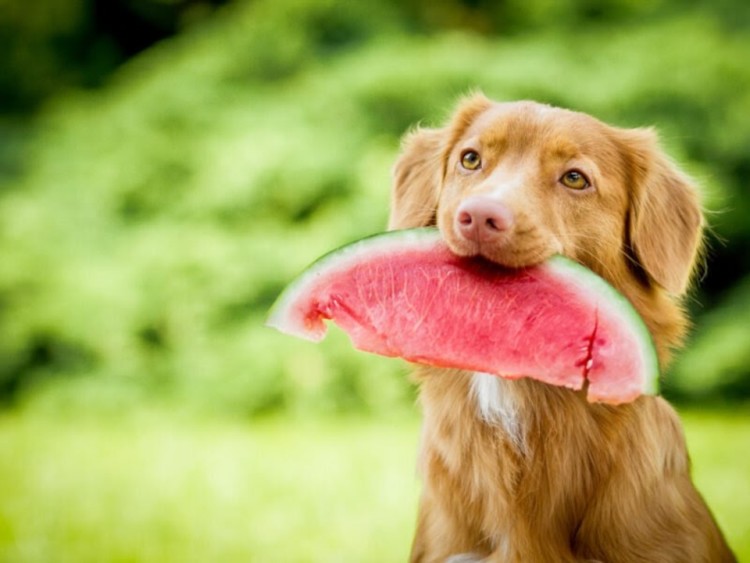 What Parts of the Watermelon to Avoid?

Dogs can safely eat the flesh of a watermelon, but not the other parts of the fruit. While the rind and the seeds aren’t toxic, they’re hard to chew and digest, therefore it could pose a threat to your pup's teeth and digestive system.

A couple of seeds won’t make a big difference, but if your pooch ingests a big number of them at once, they might cause intestinal blockage.

The watermelon rind is also not safe to eat. Being very solid, it not only poses a threat for intestinal blockage but also to your dog’s teeth. If your pooch has issues with their teeth or gums, trying to chew the rind can result in pain or even loss of teeth.

Be on the lookout for signs of intestinal blockage for 24 hours after your furry friend has eaten the seeds or rind. If you notice symptoms like abdominal pain, constipation, vomiting, or lethargy, be sure to take them to the vet immediately to avoid complications.

How Much Watermelon Can Dogs Eat?

Watermelon shouldn’t comprise a large part of your pup’s diet. If they eat a large amount of watermelon, your pet might end up with a stomachache, diarrhea, or other symptoms of gastrointestinal upset.

Many animals get an upset stomach every time they try new food, so it’s a good idea to start with small amounts of watermelon and see how your furry pal reacts. As always, it’s best to talk to your vet about the appropriate amount of watermelon for your pup.

According to experts, in your pup’s diet, only 10% of calorie intake should come through snacks or treats. When it comes to fruits and veggies, they should make up no more than 25% of their diet.

Moreover, watermelon has high levels of vitamins C, A, and B6, so constantly overfeeding your canine companion with this juicy fruit could result in vitamin imbalance. It’s best to serve watermelon during hot days to keep your dog hydrated or as a reward for good behavior during training sessions.

How to You Feed Your Pup Watermelon?

Consult your vet before feeding your furry friend watermelon or any other human food, to find out how much you should give and how often. Different pets have different nutritional needs, and some pups have medical conditions that may make this juicy treat a bad choice.

If the vet okays the consumption of watermelon, be sure to remove any rind or seeds before serving it to your four-legged companion.

Scoop the flesh using a melon baller or cut it into small, bite-sized cubes.

Only give your pet natural watermelon. Artificially flavored watermelon candy or treats can contain harmful ingredients, such as artificial sweeteners or added sugars, that could make your canine companion sick. Large amounts of sugar could result in gastrointestinal issues in the short term and obesity or diabetes in the long term. Some artificial sweeteners like xylitol can even be toxic to dogs.

Frozen Treats Freeze watermelon chunks to make a refreshing summer treat, but ensure that your pup’s teeth are strong enough to chew frozen food. If you’re feeling creative, combine two cups of watermelon flesh with a cup of water or coconut milk, then pour the mixture into ice cube trays and freeze them to get tasty frozen treats.

Instead of coconut milk, you can use yogurt for your frozen watermelon treats. Just make sure it’s plain and low-fat or non-fat yogurt and that it doesn’t contain any additives or sugar. Also, bear in mind that not all pups tolerate dairy, so be careful how much you give to your canine companion.

Smoothies Combine watermelon with other dog-safe healthy ingredients such as blueberries to prepare a smoothie or fruit salad for your furry pal.

Watermelon jerky Remove the seeds and cut the watermelon into slices, then place in a dehydrator to transform it into chewy treats. Even though this means that the watermelon will be less hydrating, it will still be delicious.

Follow your vet’s tips to make sure you’re feeding your pooch safely. 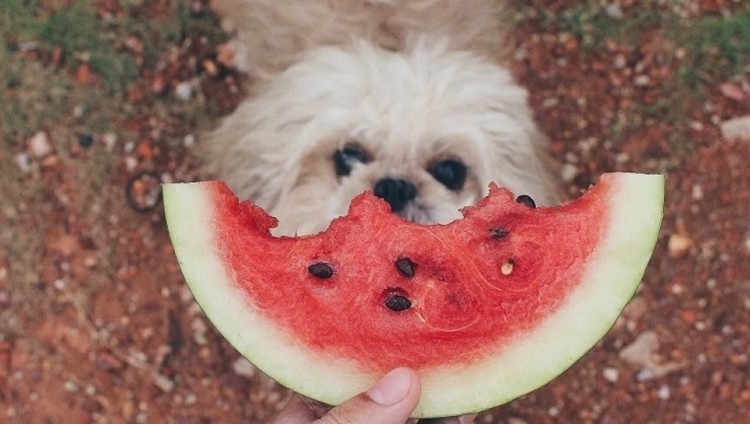 Watermelon is a safe and delicious treat for dogs, but you should serve it with caution. Bear in mind that there are parts of this fruit that your dog shouldn’t eat (seeds and rind) as they might cause gastrointestinal issues.

Introduce new foods to your pup’s diet gradually and in small portions, and make sure you’re always close to supervise.

Check with your vet before feeding your pup any human food. Although watermelon is considered a healthy treat, it's best to confirm that it won't have a negative effect on your pet's digestive system.

Dogs are curious and occasionally try to ingest something that they shouldn’t, like watermelon rind or seeds. In that case, you should take your four-legged friend to the vet right away. If your vet is not available, call an emergency animal clinic and describe the situation. Pet insurance covers sickness treatment costs if your pup is enrolled before they eat something they’re not supposed to.

Can Dogs Eat Potatoes? Here's Everything You Need to Know

Chihuahua Growth & Weight Chart: Everything You Need To Know

Rottweiler Growth & Weight Chart: Everything You Need To Know

Boxer Growth & Weight Chart: Everything You Need To Know

French Bulldog Growth & Weight Chart: Everything You Need To Know

Pet Ownership Statistics by State, And So Much More (Updated 2020)

English Bulldog Growth & Weight Chart: Everything You Need To Know

Leptospirosis in Dogs: Symptoms, Treatment & How to Save on Costs

How to Get Affordable Pet Care in 2023

5 Tips For Your First Vet Visit

How Much Does It Cost to Treat Parvo?

Dog X-ray Costs and How to Save

How Much Does a Vet Visit Cost? Here's Everything You Need To Know

Petfinder: Everything You Need to Know

Protecting Your Pets From Toxic Algae