It is not uncommon for our four-legged pals to come across mushrooms while out walking, and some pups might feel tempted to taste them. But can dogs eat mushrooms?

Mushrooms are a complicated food group. You are probably aware that humans can safely consume a variety of mushrooms, but there are also some that can be toxic or even deadly. The same applies to your dogs - certain varieties of mushrooms are safe for them, while others can be poisonous and cause serious side effects. In general, it is recommended that dogs avoid eating all mushrooms so as to not risk accidentally eating a toxic variety.

Pro Tip: Dog insurance does cover sickness treatment costs if your pet is enrolled before they eat something they’re not supposed to. Pet health insurance does not cover pre-existing conditions, so it’s important to enroll before any issues arise.

If you are enjoying a meal that involves some mushrooms, your pooch is probably somewhere near the table ready to jump at any tasty goodies that might fall. Not to mention, kids tend to sneak food they don’t like under the table while you aren’t looking. Mushrooms are one of those foods that not everyone likes, so you might find them disappearing from the table quite often. But what does that mean for your furry friends? Are cooked mushrooms actually safe for them?

The answer is - yes. In general, any variety of mushroom which is safe and acceptable for humans is also safe for pets such as:

However, if you plan to add mushrooms to your dog’s diet, avoid preparing them in heavy seasonings or sauces. Even though we like to smother our mushrooms with salt, butter, oils, as well as veggies like onions and garlic, these can easily upset your pup’s stomach. So, unless the mushrooms are served plain, it’s better to avoid feeding them to your furry pal.

If you plan to give your pup mushrooms, make sure to check with your vet first. 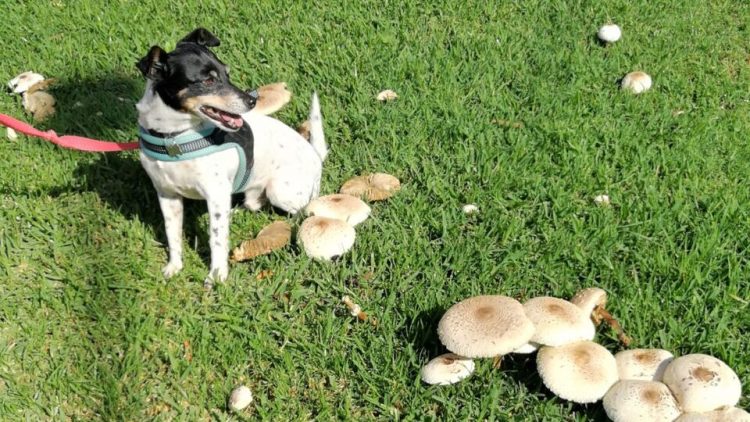 Portobello mushrooms are simply the fully mature version of cremini mushrooms. They have a complex of B vitamins like B6, niacin, thiamine, folate, riboflavin, and pantothenic acid, as well as minerals like copper, zinc, iron, selenium, manganese, lysine, and protein.

So, if you are dining on portobello, feel free to give your pup a smaller amount as a treat.

If you’re walking in the woods with your pooch, there’s a chance it might be sniffing around quite enthusiastically and even stopping to eat a little treat. But what happens if this novel treat is actually a wild mushroom? Should you start panicking?

Many people believe that thanks to their sense of smell, dogs will avoid eating toxic mushrooms. However, this is not true. In fact, some toxic mushroom species, such as Amanita phalloides have a fishy odor and, as you might already know, pups find this odor quite attractive.

Mushroom experts and vets say that wild mushrooms are an underestimated problem for dogs, and a timely response can save your dog’s life.

It should be noted that any mushrooms growing in your backyard or garden are also considered wild mushrooms and you should remove them immediately to make sure your pooch doesn’t eat them.

If your furry companion has eaten a wild mushroom, make sure to contact your vet, an emergency veterinary hospital, or an animal poison control center right away.

Which Mushrooms Are Dangerous for Dogs?

Only a small number of mushroom varieties are poisonous (about a hundred of them) but the ones that are toxic are very harmful. What’s more, distinguishing these species from the non-toxic ones is not easy, so vets recommend treating all wild mushroom species as potentially toxic.

Some of the most toxic wild mushroom varieties include:

Don’t try to identify the mushroom yourself as this can be challenging even for experienced foragers. Instead, if your four-legged companion happens to ingest a wild mushroom, make sure to bring him in for treatment immediately.

Symptoms of Mushroom Poisoning in Dogs

The signs of mushroom poisoning in pets will depend on the type of mushroom, the toxins it contains, as well as any underlying condition your pet might have.

Other mushroom species simply cause gastrointestinal upset and are rarely fatal, but it can be difficult to figure out what kind of mushroom your dog has ingested based on the symptoms.

Here’s a full list of the most common symptoms of mushroom poisoning in dogs to help you keep your four-legged pal safe:

Some animals might be allergic to mushrooms. Symptoms of a potential allergy include:

Some dogs can be extremely sensitive and have a severe reaction after ingesting mushrooms, even though this is very rare. However, you should be on the lookout for symptoms like: 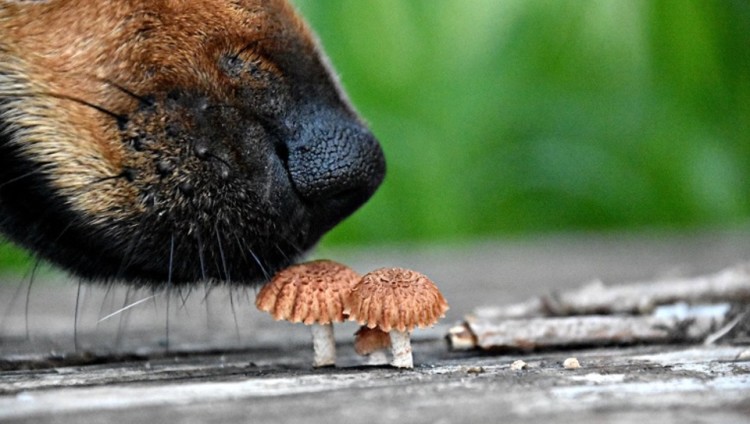 How to Treat Mushroom Poisoning in Dogs

Treatment options for mushroom poisoning will depend on the species of mushroom ingested, how recently they were ingested, as well as the symptoms. It can be helpful if you can bring a sample of the mushroom in question, as this will help your vet determine the best course of treatment.

Even though there’s no universal antidote to treat mushroom poisoning in pets, your veterinarian will focus on ridding the animal’s body of the toxin. This may involve making the animal sick in order to induce vomiting or using activated charcoal to bind the poison. Supportive care such as anti-nausea and liver-protectant medications, as well as IV fluids may also be provided.

Pet insurance can be a lifesaver (and walletsaver). If your dog eats something they shouldn’t, and they’re enrolled in pet health insurance, you can get reimbursed up to 90% of the treatment costs. This way, you’ll be sure you have all the support you need to care for your pooch.

How to Prevent Your Dog from Eating Mushrooms

Here are a few suggestions on how you can reduce the risk of your pooch ingesting a poisonous mushroom:

How to Safely Feed Mushrooms to Your Dog

It’s always best to talk to your vet before introducing new foods into your pet’s diet.

Like any new food, you should introduce mushrooms in your pet’s diet gradually in order to avoid stomach upset. Increase the amount of mushrooms you are giving your dog slowly over a period of several days. If you notice any of the above-listed symptoms, stop feeding your dog with mushrooms immediately. In addition, be sure not to introduce two or more new foods at a time so that you can identify the culprit if your pooch ends up with a stomach upset.

Fresh or dried mushrooms contain more nutrients than preserved mushrooms or canned mushrooms. However, you should always cook mushrooms before giving them to your pet. Dogs don’t create the enzymes needed to break down some of the sugars and the dietary fiber present in mushrooms, so if your pet eats them raw, they can cause stomach upset (diarrhea, vomiting, or both).

Don’t forget to wash the mushrooms before cooking. Slice or chop them, then cook them in a pan using a dog-safe cooking oil such as olive oil. As mentioned earlier, you should avoid adding salt or seasonings but you can add some low-sodium beef broth or chicken broth for extra flavor. You can serve the mushrooms on their own or combined with your pet’s regular food.

Finally, make sure to give mushrooms in moderation to avoid upsetting the balance of your pet’s regular dog food. Any extra foods should make up no more than 10% of your pet’s diet, while the other 90% should be his regular food.

How to Get Affordable Pet Care in 2022: Money-Saving Tips

5 Tips For Your First Vet Visit

How Much Does It Cost to Treat Parvo?