You may know that fish is an important staple in healthy human diets, but is the same true for dogs? Tuna is one of the most commonly eaten fish, so it makes sense to wonder if our canine companions can safely consume it too.

The answer is yes, dogs can eat tuna safely and it is not toxic to them. In fact, this fish is even included in some commercial dog foods. However, there are concerns related to the level of mercury found in some tuna varieties.

Read on to learn everything you need to know about feeding your canine friend tuna: the health benefits, the risks, how much they should be eating, and more.

Pro Tip: Shopping for pet insurance can be overwhelming and confusing. We recommend getting at least three quotes, ask family and friends for their recommendations, or simply use Pawlicy Advisor's free comparison charts.

Tuna is safe for dogs to eat in small amounts and on rare occasions. In fact, some commercial dog foods contain tuna as an ingredient, which proves that this fish is safe for canine consumption.

Like other fish, tuna is packed with omega-3 fatty acids which boost cardiovascular health, regulate blood pressure, reduce inflammations, and lower cholesterol levels. It's also a source of protein that's responsible for building strong muscles, and it's low in bad fats that can cause obesity and secondary health problems in dogs.

Tuna is rich source of nutrients, including:

When is tuna bad for dogs?

Despite all the above-mentioned, tuna should definitely not become a staple in your dog’s diet. The reason why dogs shouldn’t consume tuna in large quantities is that this fish is also a source of mercury. Eating big amounts will lead to a buildup of mercury over time, which can cause serious health issues.

The bottom line is that although tuna is good for dogs because of its amazing nutrient profile, other fresh, short-lived fish that have lower mercury levels can provide the same benefits without the risks.

Can dogs have canned tuna?

Canned tuna in small amounts can be a safe and healthy protein-infused snack for your canine friend. Opt for tuna canned in water rather than oil and choose albacore or skipjack tuna rather than larger types of tuna (like bigeye or bluefin tuna) for a lower mercury content per serving.

The high levels of sodium in tuna can also be a problem. It is also toxic to dogs if consumed in large quantities, which is why you should make sure the canned tuna doesn’t have any added salt.

Some canned tuna can contain spices and herbs which are safe for human consumption but can cause illness in dogs. 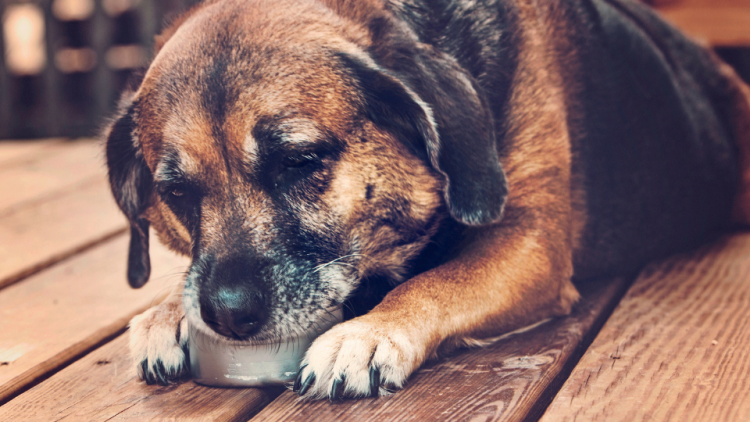 The levels of mercury are much higher in tuna compared to other kinds of fish, which is why raw tuna is not the safest choice for your dog.

Mercury is a heavy metal that enters the seas, oceans, lakes, and rivers through burning fossil fuels, industrial activities, or can be caused by volcanic eruptions and forest fires. In general, larger fish that live longer (like tuna) tend to have a higher concentration of mercury in their tissues.

A little bit of tuna probably won’t cause any harm because, as we already mentioned, tuna is not toxic to dogs. However, if your dog has eaten larger amounts of tuna and starts exhibiting these symptoms, be sure to take them to the vet right away.

If mercury poisoning is confirmed, your pet will be hospitalized and given intravenous fluids, antibiotics, anti-inflammatory drugs, and oxygen therapy. Your vet might also administer activated charcoal and chelation therapy to bind to the mercury and eliminate it through the kidneys.

Mercury damage is permanent, so if your canine companion has suffered severe damage to the cardiovascular, renal, or nervous system, their quality of life is expected to be poor. For this reason, it’s best to keep items with mercury out of your dog’s reach and feed them tuna only in small amounts.

Pro Tip: Treatment for poisoning can cost hundreds of dollars. Safeguarding your dog with a pet insurance policy is an effective way to prepare for emergency expenses and ensure peace of mind.

In addition to high amounts of mercury, raw or undercooked tuna (or other types of raw fish) poses a risk of harboring and transmitting parasites such as Salmonella, Clostridium, and Listeria. These bacteria are dangerous to dogs, which is why any fish your pet consumes should be properly cooked.

Weaned puppies and pregnant dogs can benefit from the extra lean protein found in tuna in addition to their regular diet. Light tuna (tuna canned in water) can be offered in small amounts as a treat or as part of a balanced home-cooked diet.

How to serve tuna to your dog

If you intend to cook tuna for your pet, it is best to buy it in stakes and prepare it by steaming, grilling, or baking. Don’t add any salt or seasonings and be sure to remove any bones. Fishbones are very fine and if your dog swallows them, they can abrade or penetrate the lining of the digestive tract, causing aggravation or physical injury. 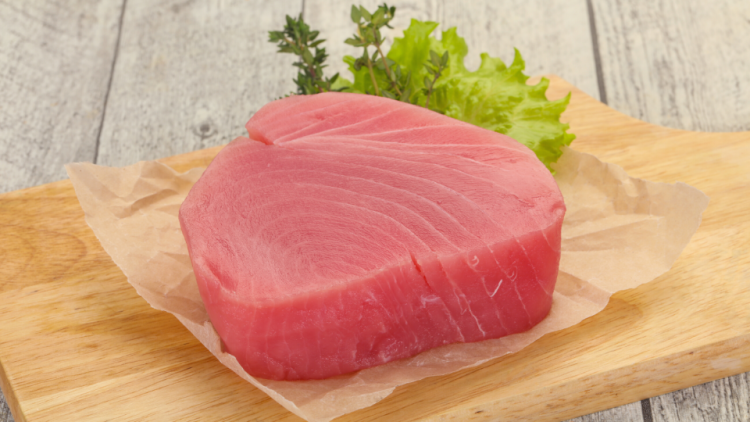 The fins, tail, and head of the tuna fish shouldn’t be fed to dogs as they also pose a choking hazard, can potentially cause oral trauma, and increase the risk of intestinal perforation. Fresh tuna should be thoroughly cleaned, deboned, and filleted before serving it to your pet.

If you’re not into cooking, canned tuna is a great option, but be sure it’s packed in water and that it doesn’t contain any spices or additives.

How much tuna can my dog eat?

While tuna offers numerous nutritional benefits, the risk of mercury poisoning makes it suitable only as a rare treat. Keep the servings small (about one tablespoon) and don’t serve tuna every day. Start by introducing a small portion and monitor your dog’s reaction. If there’s an allergy or another health issue, it’s likely to become evident within 24 hours.

Large breed dogs can eat one can of tuna over the course of one week, but not every week. Small breeds can safely consume about half a can over one week.

Your vet will guide you on the amount of tuna suitable for your pet, based on their size, weight, and medical needs.

Which types of fish can dogs eat?

Certain fish species like shark, swordfish, king mackerel, and tilefish are typically harvested when they’re larger and older. This means that they’re more likely to have an accumulation of unhealthy mercury levels and often harbor parasites in their skin, muscles, and internal organs.

You should also avoid feeding your dog farm-raised fish as these fish are likely to have harmful dyes, residual antibiotic levels, and other toxins in their tissue once they’re harvested and processed.

Can Dogs Eat Apples? Here's Everything You Need to Know

Can Dogs Eat Avocado? Here's Everything You Need to Know

Can Dogs Eat Bananas: Everything You Need to Know

Can Dogs Eat Blueberries? Here's Everything You Need to Know

Can Dogs Eat Broccoli? Here's Every thing You Need To Know

Can Dogs Eat Carrots? Everything You Need to Know

Can Dogs Eat Cashews? Here's Everything You Need to Know

Can Dogs Eat Celery? Here's Everything You Need to Know